Gardening
in Tucson, Phoenix,
Arizona and California
Back to Menu

Pictures of Bats and Hummingbird at Feeders

Tips for a Successful Hummingbird Garden

Select a combination of flowers, shrubs, bushes and trees that bloom throughout the year.
Provide evergreen shrubs and small trees with horizontal branches for hummingbirds to hide when they are resting. These should be 25 to 50 feet away from flowering plants with a clear view of the flowers.
Include plants that tend to attract many small insects from which hummingbirds can get their daily protein, vitamins and minerals. Small insects and spiders comprise up to half of a hummingbird's diet. These include aphids, whiteflies, ants, mosquitoes and fruit flies.
Avoid spraying pesticides and herbicides. These will poison hummingbirds. Systemic herbicides show up in flower nectar.
If you feel a pesticide is necessary, grind up two Habanero chili peppers and two garlic bulbs in a blender with one-third cup of water. Strain out the solids and you have a concentrate. Add one-quarter of the concentrate to one gallon of water and spray the plant. This mixture will not harm any bird.
Hummingbirds make their nests using alternating layers of spider webs and cottony plant material. Leave the spider webs for the hummingbirds between February 1 and June 1. Kill only very poisonous spiders such as the black window and desert (brown) recluse.
Hummingbirds like misters even more than birdbaths. Clip a mister nozzle on the top of a tall shrub pointing straight up. Hummingbirds will fly through the mist, perch on leaves in falling mist, and drink from the water droplets on leaves formed by the mist. To save water, put the mister on a timer that turns on for one hour twice a day. Keep the mister at least six feet off the ground to avoid cats.
See Hummingbird Feeders / Critter Problems. 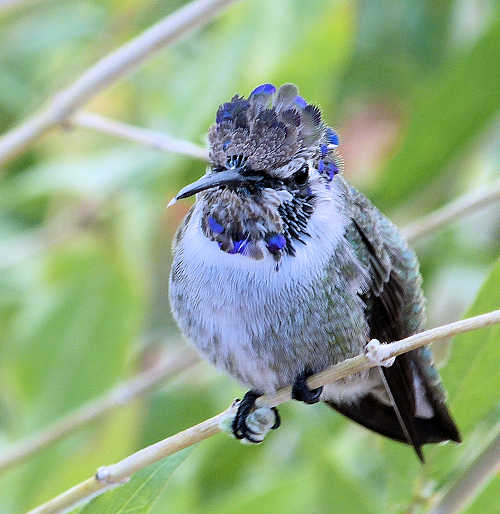 Penstemon eatonii: Firecracker Penstemon
Bright red tubular flowers, 1" long. Blooms on and off from spring into fall, depending on rain. Easy to grow.